Rearrange Again: Thoughts on Sexual Renegotiation and Privilege or “I’m Coming Out…But DO I Want the World to Know?”

I remember watching Luminous (the seventh episode of Showtime’s The L Word, circa season two) and really relating to this one particular scene where the character Jenny Schecter goes off on an impassioned diatribe over the way a guy in her creative writing class has portrayed women in his latest piece: “Because … you basically turn them into these nameless, faceless, body part whores… Your main character, Jasmine, she, like, opens up Madelaine’s world by giving her the best fucking orgasm she’s ever had, which, I don’t know if you know this, is the primary sex act that two women can actually have! And then you go ahead, and you belittle it by turning it into pornography, and I think that the reason why you’re doing this is because men can’t handle it, the fact that these women can have this amazing, fucking, beautiful, mind-blowing orgasm, without a fucking cock!”

This is the season where Jenny’s character is first coming out, and – as clearly evidenced in that monologue – she does so in a completely balls to the wall, in-your-face manner… and it made me smile, because when I first started exploring my own attraction to women in my late teens, I was exactly the same way. Growing up with my hardcore religious mom and feeling like I already fell short of her expectations anyway, just by being me, I went the rebellion route with a lot of things, and my coming out was very much that in-your-face display of defiance against both the pain of that rejection and my upbringing in general. I talked about it constantly, read every piece of lesbian literature I could get my hands on, and engaged in mixed company PDA’s with my girlfriend for the sole purpose of sparking double takes and reactions. And of course, eventually I outgrew that behavior… but in the interim, when I was so defiantly focused on inciting the response, it either left me immune to or, perhaps, simply didn’t leave room for the feeling of being on the receiving end of those outside perceptions and judgments that I think many people struggle with during their coming out years. 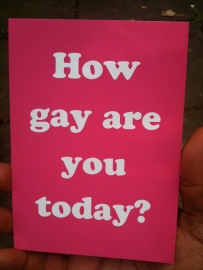 Later on, I experienced outside perceptions and judgments to a degree when I initially felt the need to justify to a couple of girls who asked me why my ex and I were at the gay bar if we were “straight” that we were cool and still “belonged” there because he was FtM . But with the exception of that one incident, the majority of outside perception and judgment was pretty nonexistent when I was with him. I was still open about who I was and who I loved to a certain extent, researching and writing on trans issues for several school assignments, and sometimes (though not quite with Jenny Schecter level flair, force, and fire) taking it upon myself to put makers of exceptionally ignorant or intolerant remarks during class discussions in their place or to provide mini sex and gender education 101 lessons to the occasional, curious cisgendered guy who wanted to know what I had against “regular” dudes like them.
One subject that came up a lot in my research were stories of partners of transpeople struggling to renegotiate their own sexual identities after their partner’s transition – and true, maybe I would have felt differently had my ex transitioned during our relationship rather than the several years prior to our having met, or had I been exceptionally attached to a lesbian identity – but renegotiation wasn’t an issue for me. Though I wasn’t in-your-face about it this time around, the incident with those girls in the gay club solidified for me that I had nothing to apologize for or justify to anyone; this was who I loved, that love came by sheer merit of who he was as a human being, and I was proud to have him by my side… and at the end of the day, that was all that mattered. And at the end of the day, having him by my side also meant that I became a recipient of heterosexual privilege… and I think privilege in general is a really easy thing to get used to. Soon enough, I hardly gave it a second thought, quietly blending in, privately enjoying my favorite dichotomy of appearing one thing and being another, yet no longer feeling the need to broadcast it to anyone and everyone within earshot.
The other thing about getting comfy with privilege is that, in a way (or at least for me), I think it can sometimes negate the need to really think too deeply into things (or at least the need to think about them as they apply to you personally)… and there’s a world of difference between feeling empathy and compassion over seeing someone else coming up against adversity and facing it head on yourself. Because I never directly felt the impact of any negative repercussions as far as how I was perceived by the outside world, I simply never thought about it beyond this abstract thing that happens to other people… and while I feel for them and speak out on their behalf, I realize it’s still never really touched me. One ex-girlfriend of mine blogged about an experience we had where a random woman came up to us in Target to tell us how cute we were together, and where I had simply smiled and thanked her, my ex described a very different experience of tensing up in anticipation of a confrontation when the woman initially approached us before exhaling in relief when her comment wound up being positive. Add to that the fact that, with all the strides made towards equality, it can be easy to get lulled into a false sense of security, thinking that things have gotten so much better, that maybe society is finally progressing, becoming more open and accepting over time… and I was legitimately thrown by the ignorant comments of my classmates during my undergrad (not to mention learning that my knowledge of gender and sexuality was more current than that of a few of my professors, a couple of whom I wound up filling in on the stigmatizing nature of the word “hermaphrodite” for intersex people).

To an extent, yes, we have made strides toward equality… but there’s still just as much hate and intolerance to be found too, and I sometimes forget that until it smacks me in the face. And, fast-forwarding to present day, the fact that I’ve been primarily dating transmen for the better part of the last four years also means I’ve now enjoyed the appearance of heteronormativity for as long, strolling hand in hand with my man of the moment with no one around us batting an eyelash. So when I found myself on a date with a woman again not too long ago (and wasn’t incorporating the shock value factor this time around when we held hands or shared a kiss in public) for the first time ever, I was fully aware of the stares and double takes from the people around us… and I wasn’t really prepared for it, honestly. I mean, it wasn’t like we were out in the Midwest somewhere; this is a North Jersey town about a half hour outside of New York City, and last I checked, it was the twenty-first century. But apparently some of the passersby in the park where we were walking hadn’t gotten that memo. Don’t get me wrong; it’s not like people were throwing rocks or admonishing us because their children were present or anything like that… but it’s also not like we were engaging in any sort of heavy PDA either, and had I been enjoying those initial “getting-to-know-you” moments with a male, no one would have given us a second glance. As someone who’s always been so matter-of-factly open and outspoken about such things, that sensation of “don’t look at me!” discomfort was a brand new one for me. All of a sudden, I was experiencing that hyper-awareness and self-consciousness that just about everyone else confronts when they first come out… and while it’s certainly not something that would ultimately deter me from exploring a connection with someone, it was enough to make me feel a little of that discomfort that I had initially escaped.
As a result, I started really noticing and becoming sensitive to a lot more; a few weeks later at a Halloween party, I overheard a guy commenting on how “freaky” it was “not being able to tell who’s a guy and who’s a girl” as I passed him with an adorable gender fluid friend of mine (she happened to be dressed in boy’s clothes that night, but all he really had to do was look at her delicate-featured, obviously feminine face in order to render his irritating and ignorant remark completely unnecessary). I settled for shooting him a dirty look over confronting him, but I was pretty pissed off on her behalf until she shrugged it off and talked me down, pointing out that, as far as she was concerned, his insecurities were his and obviously had nothing to do with her… pretty much, if she wasn’t losing sleep over it, why should I? And yeah, it’s awesome that that was her attitude about it. It used to be mine, too, if I really thought about it… but apparently feeling suddenly conspicuous after all these years had put me on the defensive… and even as I’m writing this, I can feel the residual defensiveness coming through in portions of the retelling. However, it also helped me cultivate a whole new level of awareness and understanding… as well as a renewed appreciation for how fortunate I’ve actually been to walk through the world feeling as safe and comfortable in my own skin as I do overall; I know not everyone is as lucky. But I also have to acknowledge that these challenges are real and they’re mine, too… I’m not just here to empathize with and ease things for other people. If I should, at some point, happen to connect with a woman on a deep, significant level again, there’s a very real possibility I’ll also eventually wind up having to revisit all that “mama drama” a second time around… and while I can hope my mother may have mellowed with time all I want, I can’t know for sure unless or until that happens, and the uncertainty is a scary thing to sit with; she’s gotten as used to my heterosexual privilege as I have, if not more so. The one thing I can be sure of, though, is that, whatever obstacles and challenges may be part and parcel of it, whatever rearranging and renegotiating might need to take place, as long as where any of us ultimately end up is in a place of being true to ourselves and our own hearts… that’s what makes it all worthwhile.

This entry was posted on Monday, November 19th, 2012 at 09:19 and tagged with acceptance, acceptance revolution, coming out, dating, dealing with criticism, ftm, gender, identity, lesbian, lgbt, lgbtqia, relationships, self-acceptance and posted in Uncategorized. You can follow any responses to this entry through the RSS 2.0 feed.
« Personal Experience Spotlight: Jennifer
Personal Experience Spotlight: Lauren Dobo/Eric Ryan »

One response to “Rearrange Again: Thoughts on Sexual Renegotiation and Privilege or “I’m Coming Out…But DO I Want the World to Know?””